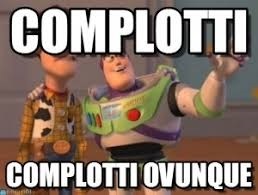 Unveiling the truth through debunking is not enough to persuade conspiracy theorists. Plots take advantage of universal cognitive mechanisms

It began in the 1960’s in the US to find the hidden instigators of JFK assassination. From that time, we have been experiencing unconventional stories around lots of topics, backed by reasonings that might sound fanciful, but succeed in lasting over time and bringing together a relevant number of people.

There is a conspiracy theory for almost anything. From the actual nature of chemtrails to 9/11 responsibilities, from the details of Princess Diana’s death to the attempt to establish a New World Order, conspiracy theorists come out anytime there is something unclear or even minimally fogged.

The pandemic gave many inputs to work on, worsening the infodemic with supposed global plots on virus origin, vaccine-related interests, the ‘system’ influencing lockdown decisions. If they were just social chit-chat, we might decide to leave them. But these theories are increasingly dangerous since impacting real life and directing mainstream behaviours, with people refusing to wear protective masks or get vaccinated. Or assaulting Capitol Hill in Washinton DC.

It’s quite easy to identify a conspiracy theorist. He or she generally refers to ‘powerful elites’ and secret plans to conquer or destroy the world, hidden truths, supportive endorsers erasing proofs, media keeping the news out of their agenda. Those who reject the conspiracy are labelled as ignorant, dominated by conventional culture, or even plot supporters.

If recognizing a conspiracy theory is such immediate, why can’t we simply unveil the trick to silence it? Isn’t the truth stronger than any counterargument?

“We really live in the post-truth age. It doesn’t make sense to separate falsehood and truth on highly polarized topics. We have mainstream and alternative stories. Fake news can be on both sides”, said Walter Quattrociocchi, associated professor at Università Sapienza in Rome, who commented via LinkedIN: “We are often asked what to do to stop these polarization dynamics, with everybody who believes to be right, and nobody who listens to the others. The answer remains the same. We are looking for a solution.”

A popular strategy to dismantle fake news and conspiracies – that is debunking – is proven to be little effective since operating almost solely at a rational level. Debunking is about data, examples, and factual elements that deny the theory and make it fall down. But conspiracy theorists act on a different, deeper level.

In a recent article on La Repubblica, Anna Ichino from Università degli Studi di Milano and Lisa Bortolotti from University of Birmingham wrote conspiracies address specific psychological needs. These include the epistemic need to have a clear view and explanations for what happens around us, the need to control our small world, acknowledge ownership and accountability. It’s also about the need to defeat loneliness and fear by being part of a group. It might be an unconventional group, giving us the illusion of being special and legitimate to access hidden truths that only a few are aware of.

We are less rationale than we would like to, and we don’t like this. But the truth is, that it might happen to be fascinated – sooner or later – by some conspiracy theory. These theories take advantage of universal cognitive mechanisms and succeed in pushing debunkers away, as if they were party poppers trying to puncture the bubble we are isolating in.

As negationists and conspiracy theorists tend to proliferate in socially disadvantaged environment, Ichino and Bortolotti welcome the improvement of social cohesion and community values as a possible solution, together with specific actions to address inequalities and increase trust toward istitutions.

It’s also interesting to remind writers union Wu Ming’s suggestion. Back in 2018, on Internazionale it wished for new debunking practices to acknowledge the needs conspiracy theorists work on, and tackle the search for truth from a different perspective. Looking at debunkers as illusionists, the idea is to unveil a conspiracy without disappointing those who believed in it, that is “discovering the trick behind magic without spoiling its fascination. We might want to enhance this feeling by moving it to a more conscious level: from being amazed by the outcome to being amazed by the techniques the illusionist uses, and the great effort he puts in a successful trick”.